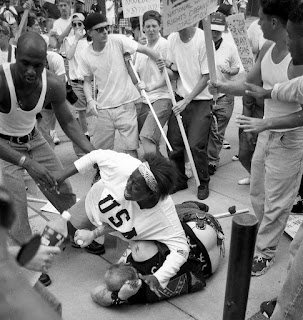 It was 1996, 2 days after my 16th birthday, and I wanted to celebrate getting my driver’s license by going to the anti-racist counter protest to a KKK rally that was happening at City Hall in Ann Arbor.  I remember being appalled that the KKK existed in Michigan, as we learned about the organization in such a past tense, that I was sure they had been abolished and were only ever in the South.  Marion Evashevski, my history teacher, asked me to look up local KKK chapters and I learned that many of them existed in Michigan as close-by as Howell, only 30 minutes away from the liberal college town that I grew up in, and were thriving, even into the 1990s. I was blown away.

My memory of the day is incomplete, so I only have fragments to offer of the day, like apparitions that pass through the open doorways of my memory.  My mom didn’t want me to go, but she was afraid of Take Back the Night and every other rally I wanted to go to, and all of those were peaceful.  I knew that I had to be there, because I wanted to show the KKK that their hatred was not welcome here, or anywhere.   I have no recollection of who I was with, but remember talking to Ilana and Tonya about going and there were lots of folks who were meeting up at school and walking over.  I remember marching along 5th Street, toward the police station, and peering through the trees to see Klan members in hoods standing on the roof of City Hall, and tall fences guarding the rally from the massive protest forming around it.  I couldn’t believe that the police were protecting them!  I was angry.

We were chanting, we were trying to disrupt their rally to make sure no one could hear their message of hate.  I remember hearing a murmur through the crowd and people yelling, “There’s a Klan member down here” and seeing a commotion, I remember crowds rushing together and then the tear gas went up into the sky.  We covered our mouths, eyes and retreated - it wasn’t until I saw this photo in the Ann Arbor News the next day that I learned about a hero named Keshia Thomas who was 18 years old and went to Huron.

I didn’t know Keshia, but I admired her so much for running into the fire - and acting to save someone who didn’t even value her life.  In a moment when she could’ve run away from the situation, like I did, she used her body to protect the Klan member who was wearing a confederate flag and escaping from the angry mob of protesters.  Hate begets hate, but Keshia acted with love, with humanity, and this photo crystalizes a moment in my brain when I became an anti-racist, and adopted a passion for love being the vehicle that decimates hatred.  I have been writing and thinking about race ever since.  I teach about it in every single class.  I navigate it every day in my family and at my job, as a white educator in the Bronx.

See, the thing about racism in the U.S. is that we think about it only in extremes.  We think of the South as racist and the North as liberators, when the truth is that racism and white supremacy is woven into the founding documents of our country, even and especially in the North, where it’s just more covert and hidden in coded legal language.  We think about the KKK and other white nationalist terrorist groups as racist, but do not see our own families, law enforcement, teachers, doctors, lawyers and government officials as racist.  We don’t see our books as racist, or what we teach our children in school (and at home).  We have “othered” racism to not see it in ourselves and the things we love, but it is present in every one of us.  My work as an anti-racist is to consciously resist the society I live in, which constantly inundates and reinforces racist tropes, in everything from TV shows to mass media to my beloved hip-hop.

A white nationalist terrorist group in Charlottesville, Virginia, held a rally on Friday and there are many cultural conversations about this on the interwebs now, and many people who have more eloquently spoken about this than me.  White folks seem to be horrified that the Klan is still so active, and doesn’t realize that they are the only terrorist group that has survived, precisely because they are upholding the legacy of our country. It has never been the land of the free or the home of the brave, and what white supremacists are fighting for is a time when this fiction of their superiority was more prevalent.

I have been obsessed with police response to the rally, as I was back when I was 16, and thinking about the police protecting hatred and violent individuals, which is what our police force is set up to do - protect white supremacy, which is the law of our land, though more covertly than ever before does it reign supreme.  Michelle Alexander speaks so clearly in The New Jim Crow about the colorblinding of drug laws in the 80’s, to remove racialized language from the laws, even though the impact of those laws was to target and incarcerate people of color from its inception.   In Ferguson, peaceful protest brought out riot gear and the National Guard.  In Charlottesville, armed with weapons and torches, beating and brutalizing anti-racist protestors, killing 3 people, there was no riot gear, tear gas or rubber bullets.  White supremacists made it out of there unscathed, and they always will in a country that protects their hate speech.  This is white privilege, in its disgusting glory.

We need to fight back. Now, the fight I’m talking about has a peculiar location - the kitchen table - but as always, I am discussing the way that we truly change people’s minds, through conversation and education.  These conversations need to begin in our everyday lives in order to leave racism behind.  Race talk is for us, not only for black folks.  People of color have been fighting back for centuries, but if we truly wish to end racial domination in the United States, it needs to be us white people, who are reflecting on ourselves and our history, who are having the difficult conversations online and in person with family members, colleagues, our children and closest friends.  We need to stand up to bigotry and call it out when we see it, every time we see it, in all white spaces as well as standing up for people of color.  We need to listen and honor the lives and experience of people of color, who have been experiencing violence and covert oppression all along, while we have claimed that we “no longer see race” and render their experiences invisible.

There is a way that white folks want to consistently  center themselves and their experiences in conversations of race, and we need to tread carefully - because we need to simultaneously make it our business to teach ourselves and our own people about interlocking systems of oppression and domination that our country was founded upon, while also knowing that we are allies in this struggle, and don’t feel directly the wounds of racism in the same way as our black and brown friends.  It is our job to listen to their stories, hear their words, and prioritize their relative safety and comfort, even and especially if it makes things uncomfortable for us.

Last, and most importantly, this includes me.  I cannot sit here at my desk, writing about all of these things that others should do without also putting in the work, every single day, reflecting on my racial experiences and microaggressions within and outside of my family and friend groups.  This is hard work, and I am far from an expert, but I offer some small actions that every single human being can take to help finally defeat white supremacy in our country.  Please read, please write your stories down, please journal and discuss and dissect.  Look at your circles of friends and analyze how diverse they are.  Set out to get to know your new neighbors from Iran, and learn about their lives.  Invite new people over for coffee.  Stand up for strangers on the street who are being harassed for their ethnicity, for their religion. However it is that you can show your allyship, do that and more.

Need some resources to get started???  I got you, stay tuned.  Thank you for beginning and continuing the conversation.  We are the change we’ve been looking for.

Thank you, Lauren, for changing the world in your persistent, loving way. I am honored to be in your circle.

lolosita
I am a teacher and restorative practitioner at ACCE, in Ypsilanti, MI. I am a mom, a radical educator, a poet, and so much more than 140 characters. Hailing from Detroit/Ann Arbor and midwest-to-the-core, I am also entrenched in a love affair with new york (we've had a 21 year on-and-off thang) and with always being a student of the art of teaching. Here, you will find reflections about the triumphs and struggles in bringing a love of literacies to my students, being a parent, and of dismantling the white supremacist capitalist heteropatriarchy. Welcome to my work in progress.

that reps the motor city.

love this banner above the lockers